Part 2 If you have not seen part 1 yet go Here first: https://youtu.be/vFn0yOuvG1E

In this episode JJ is making progress on reshaping his play habits. This video contains clips from session 2-4 of his work on these play exercises.

At this point we have not reintroduced control (obedience) during play only the aspects of the game, such as properly targeting the equipment,

where JJ should play: front

when JJ should let go: only on command.

In the opening of the video I mentioned testing to see if JJ was ready for control. My estimation during the session was that he was not. I saw frustration after only a few seconds of tug that flipped him back to old habits. I made the judgement to hold off on control. - see the control reintroduced in part 3 to come. (It looks great!)

Note the very infrequent "out" command. It is essential not to rush the out. Mostly we let JJ win the game when he does the right things and stop playing, stop the fun, when the wrong things happen or when he makes wrong choices.

We do not use any correction either social or punishment during this play. Doing so would cause more problems and may have contributed to the creation of the habits we are now working to undo.

In order to set up the out we start by making a very strong contrast to: we are playing (add energy) vs. we are not playing and the toy is dead. We use the marker "no" for JJ to understand he is being non-reinforced not that he is being punished. JJ has a different set of markers associated with correction. 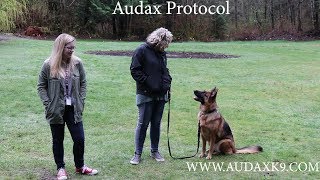 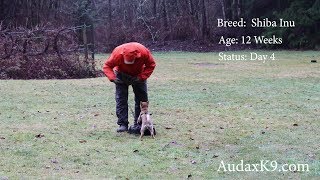